Visual music in the age of Trump 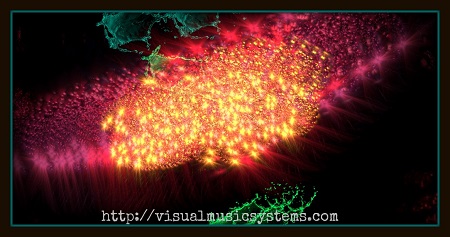 I have been bored by reality for a long time. I am annoyed that the images presented to my eyes are formed by photons bouncing off surfaces without regard to how they make me feel, and even worse when things keep looking the same second after second. Like this is really boring, so let’s show it to you again and again and again. I want to experience a different reality – where everything you see is there for the purpose of making you feel something interesting, and every instant is a magical scene that will never exist again. Allowing people to create and share these alternatives to reality seems to be the most important work I can do.

But now the right to create alternative realities has been claimed by people intent on spreading hatred and destruction. The President’s spokesperson claims that their “alternative facts” are just as valid and important as any other reality. To them, the millions of people who attended their inauguration but could not be detected by cameras were just as real and significant as the millions of women photographed the next day objecting to this new world. The dream of everyone with a brain and a heart is to corral the public back into a shared reality where Trump’s alt-facts are universally understood as unacceptable lies.

In this context, I feel compelled to add a disclaimer: when we encourage people to check out an alternative reality, we are not suggesting that the reality of climate change is a personal choice or that the past can be mutated for the convenience of those in power. Instead, we our goal is to take you to a beautiful place so that when you return back to your old world, you can carry some of this magic with you. Maybe that energy, that magic, can help cure us of the disease of alt-facts that is destroying our society.