Creating colors in a shadow world

Virtual reality in the scotopic range 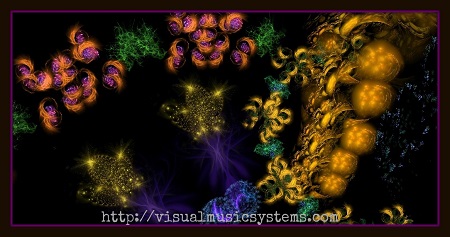 When you work in a range too dark for the cones in the eyes to perceive, you can create images that the viewer half sees and half imagines. This is designing in the scotopic range, a range with too little luminance for the retina cones to function. This becomes a shadow world where viewers struggle to identify what they are seeing and what they are imagining. The original OVC was designed to work well in this range, and Bill often started concerts with journeys into this shadow world. The theaters had to be specially modified – a single exit light or even pilot lights on the musicians’ amplifiers could kill the effect.

Beginning shows with these shadow images forced the audience to start using their eyes in a different way. Most people spend their days using their eyes to identify patterns by filtering out most of what is in the scene. Bill wanted the audience to use their eyes to experience sensation rather than filter it out. With such low levels of light and barely visible images, every photon became a friend to be welcomed without background checks. The filters that the audience used on a day to day basis to decide what in their visual field was important and meaningful were switched off. This prepared the audience to process the visual music as a sensory, emotional, experience and not as a logical one.

Moving even further into the scotopic range where even the retinal rods can perceive little moved the audience even further into dream land. Even without visual input we will still see patterns and images—visual noise from our brains. In the lowest levels of the scotopic range, the images the audience saw might have been from the OVC or from their minds. Without this clear cut distinction between real and imagined, the audience slipped even more into an alternate reality of sensation.

While the original Oculus DevKits almost had a low range that was dark enough for working in the scotopic range, the new Oculus doesn’t. The new Oculus uses a SRGB color space that was originally designed to show PowerPoint presentations in offices full of fluorescent lights. We can only hope in the future that Oculus will improve their hardware and perhaps even offer 12 or 16 bit color or other ways to improve dynamic range.