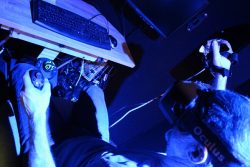 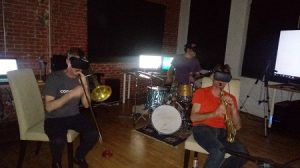 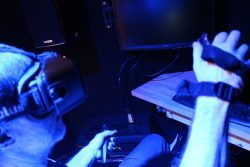 From 1978 to 1987, Bill Sebastian created the original Outer Space Visual Communicator. The original OVC was a towering machine made of stainless steel and wire. Bill brought the OVC on tour with the Sun Ra Arkestra and created live visual music at shows across the country. From 1988 to 1991 Bill began working on the OVC-3D. At the time, the number of pixels available per frame was too low for high-quality virtual experiences. So from 1992 to 1995 Bill began working on Virtual Scene Systems, a company dedicated to improving technology for virtual reality. In 1996, this company became Intelligent Compression Technology (ICT). Bob Eastwood came on board to help develop data compression technologies. In 2008, ICT was sold to ViaSat.

In 2011, Bill left ICT and ViaSat and came back to the OVC. This time however rather than building a hulking machine of stainless steel and wire, he began to work with immersive displays including VR headsets and dome projectors. That year, Visual Music Systems was born in downtown Boston. Bob Eastwood, Joshua Slocum, Yulia Yelkhimova, and eventually Nathaniel Reskinoff came aboard to create visual music for the 21st century.

The early years of VMS featured exploration of different technologies and modalities. The team created unique hand and foot controllers for the system, built immersive booths, and created a giant dome for projection shows. While the current VMS player relies on a headset and not the earlier technologies, what, why, and how we built each is included below as part of our history and a how to for anyone creating their own technologies. 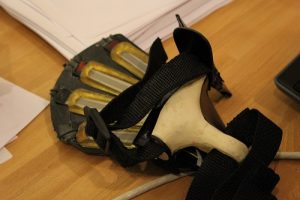 We experimented with most of the commercial motion controllers, game controllers, and user interface devices, but found nothing that matched our requirements. What we wanted was: Precise tracing of 6D hand position over… 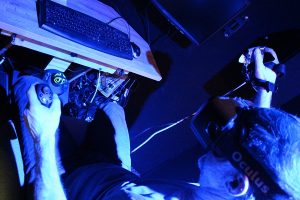 We have to spend long hours underwater and needed both a comfortable immersion environment and an easy way to get in and out. The pictures might give you some ideas for constructing your own spaceship…

We use foot pedals to control the master brightness levels of multiple banks of effects, so we need pedals with USB inputs. The Behringer FCB1010 at $149 provides an off-the-shelf solution… 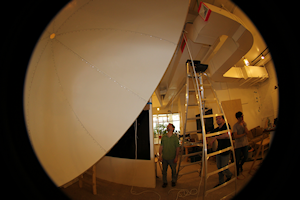 Our goal at VMS is to create alternate visual realities – to allow the viewers to visit other worlds. The OVC-3D supports several types of display systems. We built a 12 foot diameter dome…