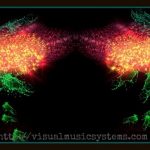 Besides Sun Ra, Dr. Seuss has been one of the biggest influences on the creation of the OVC-3D and on Bill’s approach to music and reality. The Cat in the Hat was released in 1957 when Bill was just learning to read. Back then, beginning readers were forced to endure Dick and Jane in their tame, uptight world in order to learn to read. Dr.Seuss changed all of that. Theodore Geisel “delighted in the chaos of life… delighted in the seeming insanity of the world around him” (Michael Firth). Rather than reproducing the boring reality of Dick and Jane’s world, The Cat in the Hat upended that reality, bringing in chaos and “fun that is funny”.

The culture that Bill was living in and the media that he got to see all seemed dead. How society was structured and what adults were doing all seemed dead and dry. And then Bill read The Cat in the Hat and saw this crazy representation of the world, written by someone who clearly got it—got that there was more to life than rigid rules and routines. While schools were slow to adopt the book in classrooms, the book flew off bookstore shelves as kids told each other about this crazy new book (Wikipedia). Bill wasn’t alone in appreciating the message that there’s more to life than what was in the Dick and Jane stories and in the rigid confines of 1950s society. The book sold more than a million copies in three years, changing both children’s books and how Bill looked at the world.

The book’s influences go deep. If you look closely at the visuals in Bill’s visual music worlds, you will see echoes of Dr.Seuss’s drawings. His drawings balanced energetic chaos and function. His trees bend and twist and explode with life but they are still trees with a recognizable shape. That balance between crazy energy and function is echoed in many of Bill’s images.