When Bill learned to play the OVC as a solo instrument 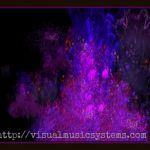 It was 1979. Bill was performing with Sun Ra’s Arkestra at the SoundScapes Performance Center on West 55th street in Manhattan. The band was doing breakdowns. Players were being called on to solo while everyone else put down their instruments. First Sun Ra called on a drummer and then a sax player and then he pointed to Bill and said it was his turn to solo. The OVC made visual images and not audio noise and the whole room got real quiet so you could hear the shuffling of chairs. Bill had never tried performing solo before—even when he practiced at home he usually had music on or friends over playing their instruments. The idea of the OVC as a solo instrument had never crossed his mind. But he played his solo piece that night and got to thinking.

By August of 1980 he was ready. He did a concert in Boston at the Boston Visual Artist Union on North Washington Street called Silent Monk. He played versions of Thelonious Monk songs on the OVC with absolutely no audio. Bill’s visual compositions were based on some of Monk’s better known songs but the audience could only see, and not hear, the music. They put out white noise machines to block out the audience’s small noises and there was nothing to focus on but the visual music. That idea of performing music on a visual music instrument without any audio was what crystallized the difference between music visualization and visual music in Bill’s head. Music visualization could never be played alone but visual music can solo.