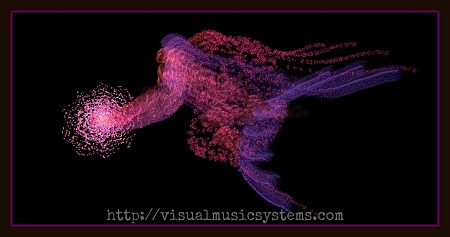 Our goal in creating visual music is to share a world beyond the logical, rational world that our eyes usually show us. Yet there is a logic, a structure, in the process of creating the art. Visual music has this duality at its core—the need for focus and discipline in creating the art and the need to express and share something that is fundamentally irrational and undisciplined.

It begins with building the instrument. The OVC-3D is a software system that has been extensively planned, designed, and revised in a thoroughly rational design cycle. Each iteration has been tested, tweaked, and improved to create a stronger instrument. But the intention behind the system is to let artists instantaneously explore their sub-conscious, their irrational mind. The process of getting there however is grounded in the dryness of reason.

The duality continues with creating the visual music pieces. The overdubbed pieces begin with a vision, an idea of something magical. Then the work begins with careful design of each and every tract and a rigid design structure that allows each successive tract to build on and enhance the previous one. The end product is a complex, chaotic visual tapestry yet the process of getting there is slow and methodic.

Even the live pieces embrace the same duality. Before a pianist can spontaneously riff or express the meaning of a piece, she has to practice over and over again until each finger movement is mere motor memory. A memory encased in the deepest levels of her brain so that she no longer has to think in order to create. At her peak the pianist can spontaneously convey her feelings without ever having to think about where each finger goes. Yet the process that brought her to that point was painstaking and grounded in the rational mind.

Playing the OVC-3D live is no different. The artist has to learn what each instrument does, what the instrument can do, and practice over and over again until movements and the creation of images becomes automatic. It is only after extensive hours of practice and trying out ideas that the visual musician is ready to play live. That’s when the artist can achieve unity—where what the visual musician feels can be instantly transformed into images for us to see and appreciate.

The initial vision and the final products both draw deeply on the subconscious, on the hidden worlds inside the artist and inside the audience. The process of getting there however remains rooted in the rationality of practice and process.