Musicianship in the digital age 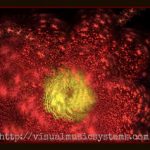 Back in the 1970s, computers were clunky and the only way to make visual music was with a towering, looming machine. Flash forward to the age of super powerful computers, virtual reality headsets, and software that can create visual music even more beautiful than the old machine. Yet in the freedom of the digital age, something has been lost. The purity of playing, of mastering an instrument and working with its imperfections is in danger of being lost.

The original OVC was a physical machine. It took Bill years five years to build the parts, do the wiring, and figuring out the engineering. It was five years of working on a vision that only he could see, with no way to know what the final product would really look like, no way to tweak the instrument.

The modern OVC-3D is primarily built with software instead of intricate wiring and metal pieces. Within two years of beginning to build the instrument he could see something—he could play something on the instrument. He could get feedback on how well things were working even while he was developing it. That allowed him to tweak and adjust his work as he went along and make the images richer, more intricate.

But that also means that the development of the new machine is never done. With the original OVC when the last wires were connected, the last pieces were installed, Bill was done and there was nothing to do but play it. With the OVC-3D there is always another tweak to be done, another feature to be added. The line between engineering and creating art has become fuzzy. You get a vision of a piece, sit down to create it and realize the instrument can’t do that yet. So, instead of playing around those limitations, you go back to engineering, add on a new feature, and sit back down to play only to realize that now something isn’t working. The process of playing becomes recursive—play, engineer, play, tweak. The constant revision of the instrument interferes with the process of developing the mastery over an instrument which is essential to effective communication and expression. It also takes away from the pure joy of creating music.

Playing around the flaws of an instrument has its own beauty too, its own creativity, that is lost in the modern cycle of improvement, of fixing the instrument. There are limits to what you can do with a saxophone and it is how you play with and push against those limits that makes some of the most interesting music. Yet now, with all digital products we focus instead on how to improve the instrument, to remove the flaws and the cycle of creation becomes unending. The evolution in technology in the last forty years has been incredible with entire worlds that can now be created with the click of a few buttons. Yet those advances come with the drawback of this always evolving, always improving mentality that decreases the opportunities for pure artistic creation. The challenge for modern artists is how to harness the potential of modern technology without sacrificing the pure joy of creativity.