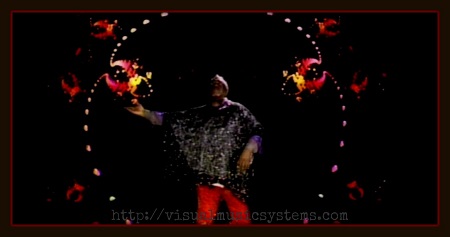 Back in the early 1970s, Bill was living in Boston and beginning to experiment with visual music. His friend Jim Washington was helping him explore obscure Japanese novels and fringe jazz music. One day he told Bill that there was an artist playing downtown at Paul’s Mall that they had to check out.

Bill got to Sun Ra’s show and immediately found in a certain way of relating to music, of relating the to the energies in music, that he had been searching for his whole life. Sun Ra was a master of the craft of playing jazz piano—he could play many different styles with exceptional skills, yet that wasn’t what he was about. He was about using these skills to help the audience explore new worlds.

Bill began to work on the OVC, both in Boston and in Texas. He listened to everything he could find that Sun Ra had recorded and used that as part of his vision for what he was creating. In August of 1978 Bill came back to Boston with the OVC in tow. That September Sun Ra was playing at Jordan Hall in Boston. Bill went up to Sun Ra after the show and described the OVC. Sun Ra and the entire Arkestra came to check it out that night. Sun Ra’s first comment on seeing it was “Why did it take you so long?”

Sun Ra immediately saw the potential for visual music and how the energies that Sun Ra harnesses in audio music could also be expressed through visuals. Sun Ra and the Arkestra stayed for three days figuring out how to include the OVC in concerts and jamming with it.

Once Bill started performing with the Arkestra, Sun Ra began shaping how the OVC was played. He would tell Bill what was working and what else might be possible to do with the instrument. That changed how Bill used it as a performer and gave him many of the ideas that he used in creating the new OVC-3D almost forty years later.