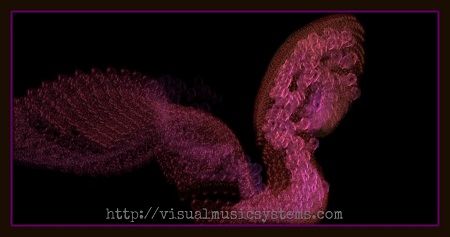 Most visual art is art is created and then viewed. The painter finishes the painting and then you view it. The film maker finishes production and then you view it. This creates a separation of the consciousness of perceiving the visual images with that of creating it, preventing direct communication between the artist and the audience. In contrast, after an audio musician has spent years mastering an instrument, the mechanical aspects of playing it have become automatic processes. The sounds are being simultaneously created and experienced.

Magical things can happen when communicating in this way, and our goal is to make this possible visually. This need for spontaneous control affects the design of instruments. The goal is not to construct an image but to play it – to have instantaneous control over the output. If the artist wants to place the object at a certain location, the controls need to place it there rather than to navigate to that location. If the artist wants to feel sharp or smooth, the image should instantly become sharp or smooth, rather than requiring a process to draw an image with those features. If the artist wants to change the color scenme, the changes need to apply instantly to all elements of the scene rather than by sequentially adjusting each element. The vocabulary used by each Instrument can be unique, but the need to be able to communicate this language instantly is common across all Instruments.

While eventually our goal is to have orchestras of musicians simultaneously playing different visual instruments in the same composition, thus far we have focused on solo performances. In the solo performances the background imagery and the rhythm, conveyed through the viewer’s movement in the environment, are pre-created by the musician. The musician then has spontaneous control during the live performance of “dancer” instruments. “Dancer” instruments communicate primarily through movement and the musician controls its color, movement, and shape in real time. In the original OVC system, the dancer was a blob of color that Bill was able to twist and move through two dimensional space. In the new, OVC-3D, system the musician is able to choose the design of their dancer and manipulate it in three dimensional space—in front of and behind the viewer as well as above, below, and to the side of her.