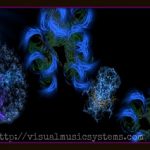 It was the early 1980s, maybe 1981. Bill had a fellowship type position at the University of Mass in Boston at the Center for Media Development. The university had a full television studio and state of the art audio equipment. About four levels below their library were the giant rooms that we almost hallways. They let Bill take over one of the giant rooms in the labyrinth. Late at night, when the university didn’t need their media equipment, Bill was able to use it and experiment with the new technology. He set up his equipment in the labyrinth and began developing develop interfaces between the OVC and new, higher resolution image technologies. He invited Sun Ra to come up from Philly and check out the new interface. Danny and Sun Ra drove up from Philly one night, getting to the university around one in the morning. They spent hours checking out the new interface and trying out ideas. For the first, and only, time Sun Ra tried playing the OVC after years of having advised and collaborated on its design. Bill captured about an hour of Sun Ra playing the OVC on film—film which has vanished in the ensuing years. Anyhow, they finished around four or five in the morning. As they started to walk out of the labyrinth they noticed that every single clock on campus had stopped when Sun Ra had walked onto campus—every clock they could see was frozen at one am. When Sun Ra came around time just gave up and stopped trying to keep up.