Visual Music is Not Music Visualization 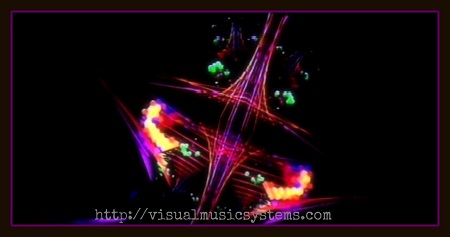 Imagine a percussion piece. All drums, nothing else. Then the arranger adds in a piano. But, instead of letting the pianist explore the range of the piano, the arranger has the pianist track the drums note for note, beat for beat. Is that creation or a waste of the possibilities of a piano? A piano has notes, chords, and complexities that a drum does not. Instead of simply mirroring the drums, a skilled pianist instead could add new elements and create a new composition in concert with the drums. Music visualization is tracking the drums note for note, beat for beat. Music visualization is taking the audio waves and directly translating them into images. Visual music is so much more.

Visual music has a range and possibilities that don’t exist within audio music. While audio music is rich on its own, when you add the visual instrument new possibilities, new creative opportunities emerge. Imagine a flute solo with a lovely lilting melody. A visual musician could play with that melody by directly tracking it through three dimensional space or instead decide to play a counter point to it, moving down when the melody moves up and slowly when it moves quickly. While the melody of the flute as an audio moves up and down in only one dimension, the visual musician has three dimensions to create in. The visual musician can create worlds built around that flute solo or explore the tempo and rhythm while creating a new melody in counterpoint to the flute’s melody. Rather than merely copying the audio, a visual musician is creating a new composition by adding new elements to the audio track.

There are analogies between visual and audio music. Both have concepts of rhythm, melody, and tone. The visual environment for a fast beat and a slow beat will look different. Moving an object in 3d space gives a sense of melody. Yet the fact that there are analogies between the audio and visual doesn’t mean that the audio directly creates the visual. The musician creates the visual in concert with the audio instruments but not dictated by them.

There are no rules for how closely the visual has to follow the audio musicians. In Yeah Man Bill has most of the visual elements in the composition directly track specific elements in the audio—especially in the solo sections where the colors and movement of the dancer directly mirror the audio instruments. This creates a sensation for the audience that the audio and the visual are one entity. In Love and Outerspace Bill does the opposite. While the visuals follow the rhythmic patterns of the audio track, most of them are not following any particular elements of the audio composition. The visual artist has the freedom to create. Music visualization is not spontaneous creation of art in conjunction with the audio track. It instead is a slave to the audio track, mechanically restrained by the need to track the audio waves precisely. Visual music is the creation of new compositions that enhance the emotional and creative impact of the audio instruments.